Nottingham Black Archive is dedicated to researching, collecting and preserving black history, heritage and culture in Nottingham, from the earliest time to the present day.

Read A Black Author In Public

Nottingham Black Archive are back this Black History season with Read a Black Author in Public to promote diverse reading and authors of African decent.

Join us to on Friday, 22nd September, 6:30pm at New Art Exchange, to celebrate the launch of the We Will Remember Them exhibition, featuring original artwork from Jerwood Prize winner Barbara Walker,  local narratives of Irfan Malik and Waple Fleming, on the Great War and the contributions made by the Indians in Dulmial Village and the British West Indian Regiment.   There will be talks from The National Caribbean Monument Charity, Dr Irfan Malik,Prof. Kurt Barling, Pilgrim Church Senior Minister Clive Foster, NBA’s Panya Banjoko who will be sharing the local research, and a parade of Caribbean Standards by WAWI.

Treasure In The Archive

On the 28th July Emma Harrison, the Assistant Archivist at Black Cultural Archives, will be talking about the life story of Phillis Wheatley. Wheatley was the first published African-American woman, receiving critical acclaim for her published volume of poetry 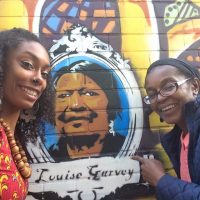 NBA were recently commissioned by The Centre for Race, Research and Rights (C3R) to deliver aspects of their mural project which celebrates Black History in Nottingham, the first of it’s kind in the city.  The project was funded by Arts & Humanities Research Council (ARCH) as part of their Connected Communities programme. We are delighted that our research fed into the final design, the mural which is  adjacent to New Art Exchange was unveiled on the 17th May.