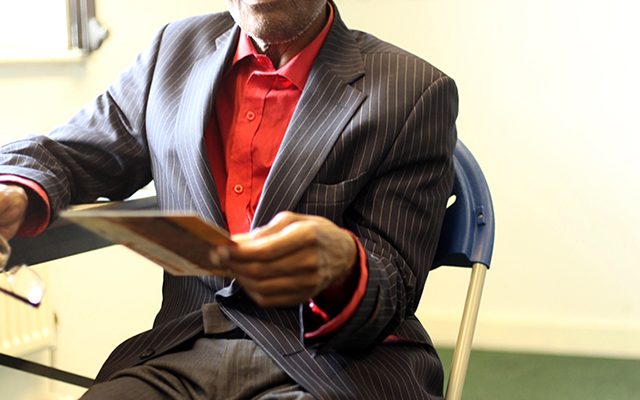 I came to England in 1943 and to Nottingham in 1951. I was in the air force for five years. When I came to England in the Cornwall areas you had to take off your hat and say ’Good morning Squire.’ if you didn’t you could lose your job.  (Mr Oswald George Powe)

– To collect stories about journeys to Nottingham from the earliest time to the present day.

– To collect stories of refugees and asylum seekers.

– To add to NBA’s oral history and photographic collection.

The Journeys to Nottingham project collected seven people’s stories about coming to Nottingham. It included recording oral histories from the first generation of Caribbean’s who settled in Nottingham between the 1950s and 1960 and stories from new immigrants coming to the City including refugees and asylum seekers.

The project highlighted why people came to Nottingham, what they encountered when they arrived and why they decided to stay in the City.

The project was launched in October 2012 with the Journeys to Nottingham static display. It was toured around Nottingham during Black History Season and exhibited at Nottingham Playhouse throughout October and at both the St Anns Valley Centre and New Art Exchange. Hyson Green, during November. In addition to the exhibition, three events were held, ‘Aint Nuthing But A Heartache’  was held at the Nottingham Playhouse during October 2012, with speakers Viola Billup, also known as Pearly Gates, one of the first Black women to work in television during the 1960s and Louise Garvey, a member of the Jamaican West Indian Nurses Association. They both shared their experiences of leaving their homes and families and moving to a new country.

There was also an evening of friendly debate, November 2012, at the New Art Exchange. This featured local elder and author Pitman Browne and Louise Garvey both talking about coming to the city during the 1960s. The final event was held at the St Anns Valley Centre and featured a poetry performance and children’s workshops on George Africanus, one of the first known African entrepreneurs to move to the city in the 1700s.