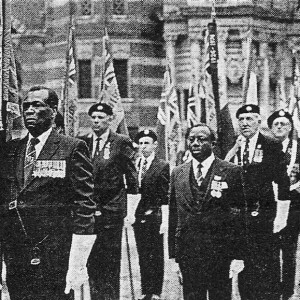 – To document what society was like for them at that time;

-To Document what society was like for their families and the cumulative effects/impact upon them.

Community Capsule, a partnership project between Nottingham Black Archive and Nottingham Photographers Hub, documented the experiences of Nottingham’s World War II Black Servicemen and their families. The project is funded by the Heritage Lottery Fund. It covered the war period 1939-1945 and up to 10 years after (to 1955).  It includes servicemen’s testimonies of fighting during the War and rebuilding their lives afterwards.

-11 oral history testimonies from ex-servicemen, childhood memories of the war.

Nottingham Black Archive are back this Black History season with Read a Black Author in Public to promote diverse reading and authors of African decent. read more →

We Will Remember Them... aims to uncover hidden narratives that will strengthen the coverage of under-represented groups in relation to the centenary of the Great War. Empire troops fought in the most infamous battles of the war, including at Ypres and Passhendaele, but the hidden histories of soldiers from the Caribbean and South Asia still need to be recovered and their stories told, not only in scholarly monographs but in other cultural forms too. This project is funded by Arts & Humanities Research Council (AHRC) and is being delivered in association with the Centre For Hidden Histories and Renaissance One read more →

Nottingham Black Archive are holding a FREE event designed for you to find out more about the Black In The City poetry anthology and how you can support the project. read more →

Bring along your objects, photographs, books, newspaper clippings - anything that documents your personal story and relationship to Black heritage and culture. We are specifically interested in receiving objects and photos from the 1970s and 80s but not exclusively so read more →

Black In The City: Poetry Anthology

The Black Writers & Artists Network are looking for poetry that responds to the theme of being ‘Black In The City of Nottingham.' The Network seeks work that is connected to Nottingham from writers who are native to the City or who have lived, studied or worked in Nottingham. read more →

Wednesday 2nd November, Queens Walk Community Centre Medows, Nottingham Black Archive and Black Poppy Rose will be remembering the heroes from the Caribbean and Africa who fought in the World Wars read more →

Read A Black Author In Public

Black In The City

On Saturday 1st October, 7pm-9:30pm, at Nottingham Writers Studio, Nottingham Black Archive will be asking the question, "what is it like to be Black in The City?" We will be taking a fresh look at the Black experience in Nottingham, comparing present day happenings with the Windrush era and asking what has changed? What has remained? And if there is still a battle to fight?! Doors open at 6:45 for registration the event is 7-9:30pm Saturday 1st October 2016, Nottingham Writers Studio, 25 Hockley, Nottingham NG1 1FP read more →

In December we started work on a project with Olympian Jamie Baulch who is researching his Jamaicn Heritage. We'd love to talk to Nottingham men, who would have been aged 22years during the 1970s with a Jamaican connection and who served in the armed forces for any period of time. Jamie will be in Nottingham Friday 26th Feb screening his documentary  Looking For My Birth Mother at The Marcus Garvey Centre, Lenton Boulevard, Nottingham NG7 2BY. There are limited free tickets, Contact us at nottinghamblackarchive@gmail.com read more →

NBA were recently commissioned by The Centre for Race, Research and Rights (C3R) to deliver aspects of their mural project which celebrates Black History in Nottingham, the first of it's kind in the city.  The project was funded by Arts & Humanities Research Council (ARCH) as part of their Connected Communities programme. We are delighted that our research fed into the final design, the mural which is  adjacent to New Art Exchange was unveiled on the 17th May. read more →